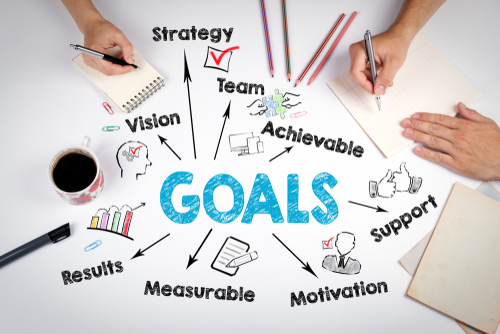 Paralyzed by your goals?

Huge goals are paralyzing. You set a huge goal for yourself (such as “I want to make 7 figures within 2 years”), and when you look at it, it feels unrealistic.

Overwhelming. You have no idea where to start.

At this point, most people just give up.

However, a lot of people (and I suspect that includes you) don’t want to just give up. So they start looking up to other people who have already done what they want to accomplish.

This is a huge mistake. You need to use caution when you do that.

For example, let’s say you wanted to become the next Amazon. On the surface, it would make sense to look at Jeff Bezos and emulate him, right? Even better, since Jeff Bezos has done it, surely it means you can do it? Not so fast.

That’s going to be like trying to compete at the Olympics without ever setting foot in a gym.

First, you need to internalize your capability to achieve your goal.

But, the advice most people will give you is to “work backwards”. Their reasoning is that since going forward is going to feel so overwhelming (because the actual progress is going to be slow), you need to start with the end goal inmind.

Most of them will also recommend you write down the steps in reverse.

Sigh. I don’t even know what that would look like. For example, I want to have 7 figure earnings. What’s the step before the final step? Make $999,999?

My point is, for those big goals, you don’t even know ALL the steps beforehand. So how are you expected to put together a list of ALL the steps, in reverse or not?

“Working with the end in mind” is better advice. Better than nothing, at least.

It’s just taking things one step at a time. For example, if I want to be a millionaire, to me it means I need to build an email list that I have a reliable relationship with. So how do I do it?

I add one person to it at a time. That’s really all my strategy consists of.

Tasks like adding one person to an email list and sending an email out do not sound overwhelming at all. But I know that over time these results will compound into something bigger… which will either lead me directly to my goal or at least give me something to leverage for my next step.